Seizures are a bitch. It's just that simple. These ugly and unwelcomed monsters come and go as they please and startle all who witness the vulgar visitor. And when these monsters decide to leave, only hateful remnants remain, like a badly bitten tongue and lost voices but in some cases, even worse. And of course, the fear... Fear for the next one that will inevitably come sooner or later, despite having no invitation to return. Seizures are only under control until the next time.

I wish these monsters would just choose to wrestle me instead of my sweet Oia. I guess emotionally, they kind of do. So admittedly, I've been a bit on edge in recent days but when the average record shifts from 2 seizures a year to 2 in 10 days, many emotions settle into a parent's heart. Worry and concern reside at the top.

Just ten days ago, Oia had her first daytime seizure. (All seizures prior have been nighttime seizures.) Had that particular day not been a canceled day of school due to inclement weather, Oia would have been in her classroom. Away from home. Away from me. That makes me uneasy. The second seizure in the 10 day period occured once she was asleep for the night. Both seizures were brief in duration, lasting up to a minute and a half, and both left her unable to speak for a short time afterwards. She tried but words wouldn't flow and lips didn't move.

The consensus is that this little spurt of activity is attributed to Oia's growth. We have followed orders and up'ed her Trilepal dose twice within the last two weeks and now it's a wait-and-see. Naturally, we hope this is the correct dose for now. We'll soon find out. In the meantime, I'm still watching her like a hawk, questioning her every move, analyzing her every look, kissing her sweet cheeks far too many times a day while asking Are you ok? and I'm still resting my hand on her chest every time I check on her throughout the night because yes, I did that long before any seizure monster came along... I think Momma's just do that regardless. But Oia will be alright. And things could always be much worse.
Posted by Mo at 7:59 PM 4 comments:

In early January, a note was sent home from the art department of Oia's school via her communication folder. A portion of it states:

This is to inform you that we have selected a work of art by Oia to be displayed at the State Capitol. It will appear in the General Assembly Building in Richmond, Virginia. We have put this show together and are sending it to Richmond at the request of Mr. Rob Bell, Delegate, 58th District, from the House of Delegates.

I had no idea what art of Oia's was chosen and frankly, I didn't care if it was absolutely created by her. It's likely the project was a joint effort between she and her assistant but that doesn't matter. What does matter, however, is that someone thought to include Oia, chose her art, and that in somewhere kind of important hangs a piece of work with her touch, and her name. There was no way we were going to miss its display. 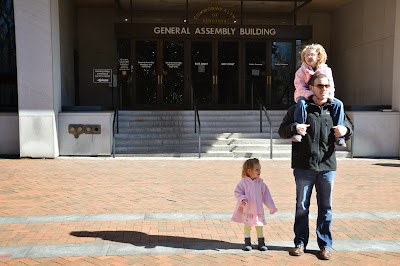 So, our party of four said no to work and school one day last week and made our way to the state capital. We really talked up the venture with Oia making sure she felt special about the idea. Once we entered the General Assembly Building we were instantly enveloped by a sea of dark suited, hurried Delegates darting here, there and everywhere. Such a busy building with busy people but even men with places to go and people to see slow down, step aside and smile for little girls in pink coats wandering aimlessly in such grand hallways. We stuck out like sore thumbs that day.

Once we wove around in an attempt to not be in the way, we finally made it to the 8th floor and found Oia's apples hanging high. We ooh'ed and aah'ed made a big deal over her masterpiece. She wasn't all that into it though as the copier across the hall was far more intriguing. I mean, all those buttons. 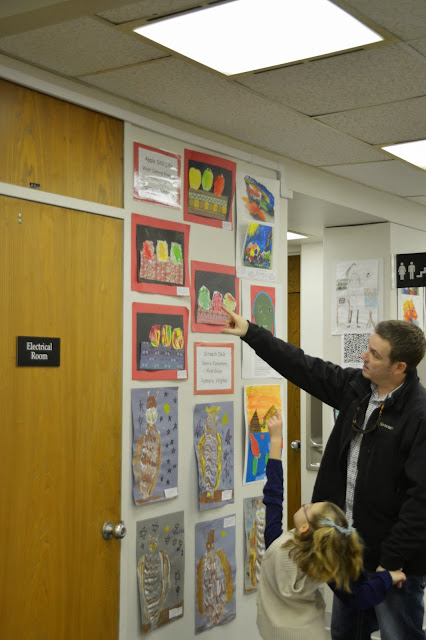 Del. Rob Bell's assistant texted him to inform him that we were there and asked that we waited around a few minutes as he was heading in our direction to meet Oia and pose for a picture with her. Oia's anxiety kicked in during the short wait but with Rob holding her, she was tolerant for a quick picture. 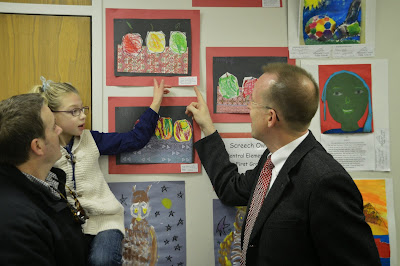 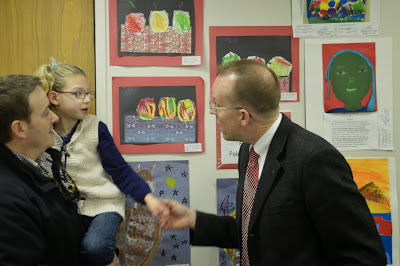 I think these apples will find their way onto a wall in our new home one day soon. They'll be one of many "masterpieces" yet to come, I'm sure. So proud of our Kindergarten artist.
Posted by Mo at 7:20 PM 1 comment: