Dealing with the Divide 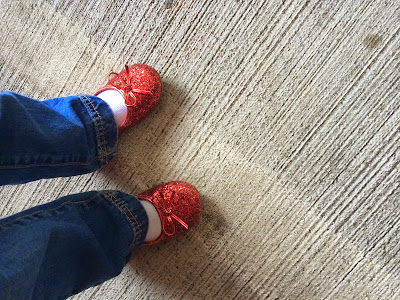 The cute sparkly red shoes that are often worn by Esme these days are a dead give-away of her obsession to the timeless production of The Wizard of Oz. Sister confirms with me each time I help her put on those beloved red shoes that Dorothy Gale wore blue socks, not the white ones that she has. It's as if the white socks are acceptable so long as I recognize the fact that I goofed on a crucial part of the whole Dorothy look-alike thing. The wrong socks, especially bright white ones, are a major fashion faux pas. I know, I get it. But at least I got the Dorothy hair-do down pat.

Luckily for Esme, as part of the Virginia Film Festival last week, a big-screen showing of The Wizard of Oz was playing at UVa's Culbreth Theatre. There was no doubt in my mind that I had to feed her obsession and treat her to the big screen despite the astronomical number of times she's watched the movie here at home. There was no doubt in my mind that she'd love it. And sadly, there was no doubt in my mind that Oia could not go with us. I've tried on multiple occasions to make Oia sit through live performances and movies but it's very stressful for the both of us. For my sweet girl with ADHD, the attempts to make her quietly remain still in a chair for even half of a show and fit the mold of what kids without ADHD can do is just unrealistic and borderline cruel. It's not her thing. Her body rebels it. And although I wish it weren't so, I must respect that.

However, such things are Esme's delight. She's hungry and wide-eyed for the imagination, the dress-up, the plots and story lines, the suspense, and all the characters that intrigue. But for Oia, it's just too much. What stimulates one child of mine does not always stimulate the other. The difference is often a challenge to parent and leaves me feeling torn. And as it often does, the great divide of parenting two very different children came knocking last Saturday and I had to make a decision. And a decision I made, the first ever of it's kind for me. I split myself. I got a babysitter for Oia (Rob was out of town) and I had a special morning out with just Esme. I had to make sure Esme saw her Dorothy on the big screen and I had to make sure she felt important, too. It felt so right yet at the very same time leaving the house with just one of my girls felt so wrong. I've never done it.

I try to parent from inside the divide, meaning I always keep both girls together, yet it is hard and not always the best of options as it spreads me very thin in some situations. The divide forces me to make decisions. The divide forces me to choose a side. Some days the divide is tiny. Like which kid gets my help and attention on the playground? Which kid gets out of the bathtub first when both are begging for a towel? Who gets to help me crack the only egg when both want to help me bake? And some days the divide is gaping. Like last Saturday. Could I take both of my girls to watch the 75th anniversary of The Wizard of Oz on the big screen? The answer was I wish.

I prefer the divide didn't exist, however it's something I have little control over. Sometimes it's there and sometimes it isn't. The good Lord thought it necessary for my girls to be just as uniquely different as they are and so I'm thankful. I'm thankful I get to take the divide and use it as a tool to teach my kids that life is a give-n-take scenario. I choose to view the divide as a natural place from where I can show my kids that differences do exist and that's okay and that being patient with what or who is different than ourselves is a must. I can teach them that the only place to go from a divide is towards the middle, and closer to each other, as we learn from one another while respecting and accepting the differences. And probably most importantly, I want my girls to seek joy in the happiness that comes from one another while experiencing life from opposite sides of the divide but remembering that the middle is where we will always meet back up. And share. And love. And be together again.

The good news is that these divides are only momentarily. Saturday's divide was only as long as The Wizard of Oz, or the yellow brick road. But the happiness on Esme's face as she gazed upward onto the bright big screen and sang Over the Rainbow along with Dorothy was no greater the happiness that poured from Oia's body as she simply raced to the front door to welcome Gena, the babysitter, who she happily had all to herself. I had two girls divided by differences that day but both with the same abundance of happiness brought on by two very different experiences. They indeed were happy. Therefore I was happy too. And I was content with the differences in my girls that day mostly because they were. And to me, I suppose that's all that really matters.
Posted by Mo at 8:32 PM 2 comments: