It's been a little over a year now since Oia's last round of CIT. It was a modified version since she was under 3 years of age. I swore then that we'd do it again one year later but clearly that hasn't happened. Casting, followed by ankle injury/recovery period, and the constant, watchful eye over her spastic and tight right leg have really taken priority in the last couple of months. Unfortunately, we only have the fight within us to pick one battle at a time. However, even though the tightness of her leg is still a major issue, she is back to 100% and so the idea of a third round of CIT has crept back into my mind. Round 3.... can we do it? I think we have to.

Yes, Little Miss uses her right arm and hand more now than she ever has before but we can't stop here. She is still so young and this is when crucial gains can still be made. She has so much potential and spontaneous use of her right hand that I feel we wouldn't be doing her justice to settle now with her current functional level. 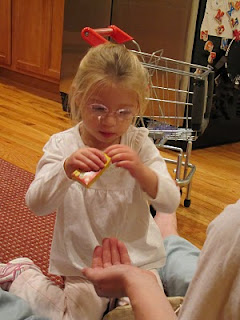 Since Oia is 3 now, she'll get the full-on, real deal, CIT "camp" if we move forward with this. Camp is 4 hours of OT a day for 5 days a week for a total of 15 days. Previous CIT's have been modified versions where the therapeutic responsibility rested upon Rob or I. We only visited an OT for one hour, twice a week and it was for a total of 30 days. It was exhausting but still very much worth every day of it. 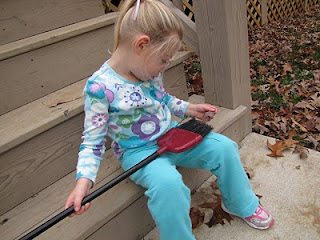 It's a lot to think about but I'm mentally preparing myself to tackle this before winter is over. We have insurance inquiries and other minor things to consider before we get the ball rolling but my heart tells me we need to do this.

I'll leave you with a video of my little helper using her right arm, no prompting. She absolutely loves to help me out in the kitchen and it melts me to see her do something for the first time because she has observed me doing it before; like throwing food scraps in the trash. This particular day, she was done with snack and decided to clean up all by herself (although I would have saved them for later but that's okay). She even put her dirty bowl in the sink... how wonderful is that?


And FYI, Oia's Botox appointment was scheduled for today but since our provider decided to dilly dally around with the approval, we had to cancel and reschedule for November 30th. Stay tuned...


Photos are recent captures of Righty at work. I still do a happy dance every time.
Posted by Mo at 7:31 PM