Post Oia's 2nd EEG in early '09, her neurologist shared two things with Rob and I that have stuck with me ever since. The first thing he informed us of is that Oia's brain activity is most "aggresive" at night. Seems odd that while her tiny self is at complete rest, her irregular brain triggers and fires like a tiny warzone, a potential breeding ground for seizures. The second thing he shared with us was that there would be no mistaking a seizure should she ever experience one, noting that her entire right side would jerk rapidly. He was only right about one of those things. As we learned in the early morning hours of last Sunday, her seizures look nothing like he predicted.

Instead, her first seizure just a day and a half ago, was absent of any jerking at all. Oia remained heavy, limp, somewhat unresponsive, and appeared to have an "aura" beforehand that resembled the need to vomit (gagging, excessive thick secretions, and dry heaving). These behaviors, or "aura", quickly manifested into eyes that locked in a leftward gaze and a girl whose arms and legs splayed from her body. 'Twas the peak of her seizure, only a few minutes that felt like an eternity, and the moment I rushed for her Diastat.

A seizure was bound to happen sooner or later. I considered it the inevitable and feared one almost every day. But the good news is... it happened at home with both Rob and I at her side. The good news is... it wasn't as violent of a seizure as our neurologist said it would be. The good news is... my sister was visiting us from out of town the night it happened so there was no frantic rush to find someone to stay with Esme in the middle of the night while Rob and I were with Oia in hospital. The good news is... we never started Oia on Adderall as we were advised to weeks ago, which now I am certain would have more than likely caused a seizure. This seizure just came unexpectedly and on its own. And more good news is... the Diastat that I had been toting around just in case for the last couple of years freed Oia of the seizure just moments after it was administered. She was sleeping soundly by the time the squad arrived. 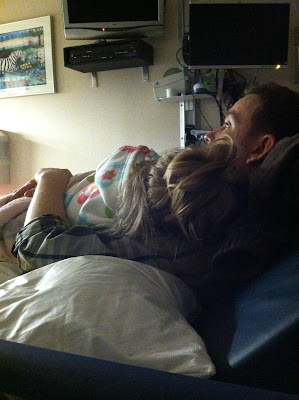 We remained in the ER from about 630am - 1130am Sunday morning. Oia slept on Rob for a good bit of our short stay but while awake she cried for home. She was tired and I'm sure confused. Neurology confirmed, based upon our descriptions, that Oia had a partial complex seizure. And now that the inevitable has happened, it's been suggested that we begin a daily anti-seizure med and it appears as though we get to welcome the new year with an EEG as well. It's time for an update of that sweet brain since obviously activity appears to have changed.

My heart tells me that Sunday's seizure has been in the works for a long while now. There have been some suspicious happenings/behaviors with Oia in the past that left us puzzled (inconsolable crying, eye gazing, similar aura, etc). Now after Sunday's episode, those suspicions were more than likely atypical neuro activity that fizzled before anything manifested into a full seizure as it did this weekend. My heart also tells me that the daily anti-seizure med is the right choice. It's time. First dose was given tonight.

Five years of seizure free living was nice. Kiddos with Schizencephaly are supposed to have seizures and neurologists all along have been confused as to why Oia didn't have them. I count my blessings. I know how fortunately we were. And I also know how fortunate we still are. We hope we are able to keep these monsters under control and at bay forever. We'll give it nothing but our very best. But only time will tell. Unfortunately though, some things are just out of our control.