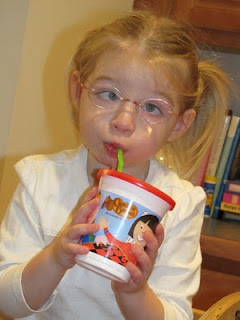 It's been almost 3 months since Oia completed her second Constraint Induced Movement Therapy (CIT). In the last month, maybe two months now, we have seen the use of her right hand dramatically increase. The increase is worth noting because not all of the use comes after verbal prompting from Rob or I. Granted, we say 'where's Righty' and 'use two hands' what feels like 10,000 times a day but recently the spontaneous use of Righty has greatly improved. In fact, I have very recently made the mindful decision to not give her as many verbal cues as I have in the past for mainly two reasons.

One reason is no one likes being barked at, no matter what age you are, especially by your own parents and two, she is becoming comfortable enough to use it on her own and I want her to feel that success as something she does without my influence. Sure, I still remind her when I feel it's important but not nearly as intensive as I used to.

She still has been wearing the home cast on her left arm for OT sessions and that works well, as long as she is in the mood to please us by wearing it. Generally, she wears it for at least half of the session. I, along with her OT, have noticed that Oia is voluntarily playing with two hands these days. It is still obvious to any stranger that Oia is left arm dominant but she does grab for toys with two open hands which is a beautiful thing. Now, she almost always will drink from her cups and sippies while holding on with both hands, no prompting. She grabs for her babies using two hands and when handing her two objects at one time, she will reach for both objects with both hands open. Also, when climbing into a chair or onto the couch, she reaches with Righty to help pull herself up. This is so encouraging to see. That is exactly the goal we are trying to accomplish...we want her to learn that Righty will be her 'helper' hand in life. We hope that one day Righty will stabilize the paper while she signs her name with Lefty and that Righty will hold open her purse so Lefty can dig deep into it. To say she has turned a corner, though, where Righty is concerned is probably a stretch as we still have a long way to go, but she is definitely making great strides in the right direction. It's all very promising since there was a point in her life when she disregarded that arm completely. 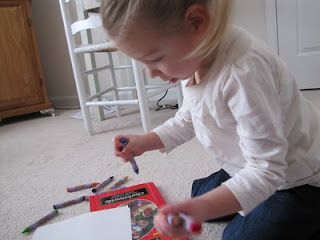