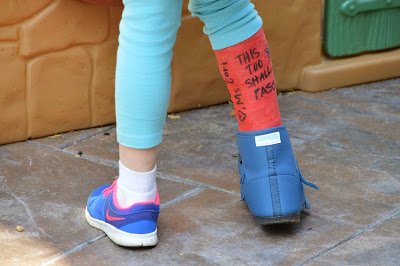 Another dreaded bout of casting is officially in the rearview. We just survived a 3 week casting period for Oia's right leg to alleviate the tightness in her lower calf. Our girl had grown so, so very tight. Since Botox doesn't work on Oia, casting at this point was our only plan of attack on her ankle contracture for at least a couple more years until the idea of another lightening surgery will be tossed onto the table.

We've lost count on the number of casts this kid has worn. I can tell you though that of the 10 cast color choices available, Oia has had all but 2 of them. Red was her color of choice for the first week this time around.

The red cast came off for skin check and repositioning after the first week. A second cast was put on for the remaining 2 weeks. Little sister and I encouraged a happy green. Oia couldn't have cared less. 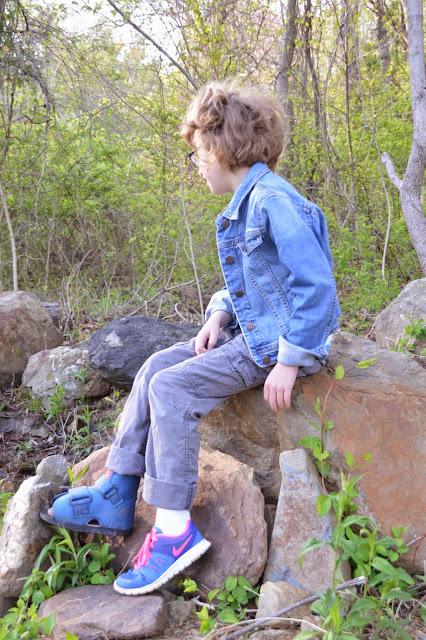 Today marks the first full day post cast. We knew what to expect from the past castings and it's often not very good. Post cast we have an extremely limpy girl who prefers to crawl or be carried. Steps are slow, with both hands held, or braced along a nearby object for support. It's frustrating for Oia. It's always a setback. Rob and I still aren't sure exactly the feeling she has post cast. Does she hurt, feel unstable, weak, unconfident with new feeling of leg, etc? Hard to say. Likely a mixture of all of the above.

She will rebound as the days pass by. She always does. By the weekend, she'll be full throttle again. And then, Lord help us.

The good news is there was enough of a stretch gained from the cast that her right foot can now be stretched to the 90 degree/neutral position once again. In simpler terms, her foot fits down into the heel of her new brace as it should and her step, with braces, is flatter. Her heel is much lower to the ground for the time being and that was the goal. The gain may seem minimal in degrees but every little bit does provide a safer, more stable gait. We are hopeful this will get us through the remainder of the year but only the next major growth spurt will tell. Her surgeon says we will play this game of grow, cast and repeat for many years to come.

Here's to hoping they bring back the fun tie-dye wrap for a much more spunky cast next time. Because yes, undoubtedly, there will be a next time.
Posted by Mo at 6:25 PM