We're trying. We're really, really trying to get this girl back on her feet yet again but it's no easy task. However, it is easier when Rob and I tackle this as a team. I spent this past week trying all I could to get Oia up and moving on my own (while Rob worked) and by yesterday I questioned whether I needed some mental counseling. I was drained and I'm not ashamed to say so. I mentioned Oia just flat out refused for me and I debated if she really remembered how to walk at all.

Bottom line: The casting recovery and then the immediate sprain have collided and combined to create a huge setback. We have resorted back to the very beginning, to the days of cruising and providing maximum assistance with each step she takes.

We have found that she is more willing to take steps when we removed her from the comforts of our home. Home is home and it's no biggie for her to flop to the floor and crawl around but a public place isn't as welcoming that way. So today, off to the mall and park we went.

Fortunately, the mall's indoor play area was not too crowded. She did cruise along one of the play structures but only for a couple of steps. Then she got mad. Since causing a scene is not my thing, we left to fill her belly before returning for round two. Second attempt was better and we were able to keep her on her feet for about 20 minutes. That's 20 minutes more than she had been on them all week. We're calling it progress.

Then, we took her to Build-a-Bear where she could cruise along the stuffed animal bins. This was successful. She moved SLOWLY but she was on her feet nonetheless. Again, we're calling this progress. She cruised and pushed a toy stroller around with our support for about 20 minutes then it was time for a break. We headed home for lunch and nap.

Once she woke from her nap, we took off to the park. There is a paved track where I thought she could push her baby buggy as a walker. She pretty much refused that idea at the start. Again, wanted to flop to her knees and cry. So she swung for a bit and smiled again before we convinced her to walk to the ladder and slide. 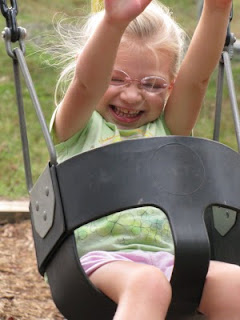 In this video, you'll see how I'm supporting Oia on her right side by holding her right arm per PT's advice. The gentle pull I give her is forcing her to put some degree of weight on her right leg. I am giving her quite a bit of support and you'll see her right leg give as she steps forward with Lefty.

Rob and I think that Oia is partly shy of her own legs at this point, meaning she doesn't fully trust them which may explain some of her reluctance to stand and walk again. She has experienced a lot in the last month or so and we can't say that we blame her...but walk on Sweet Girl, we've got you.